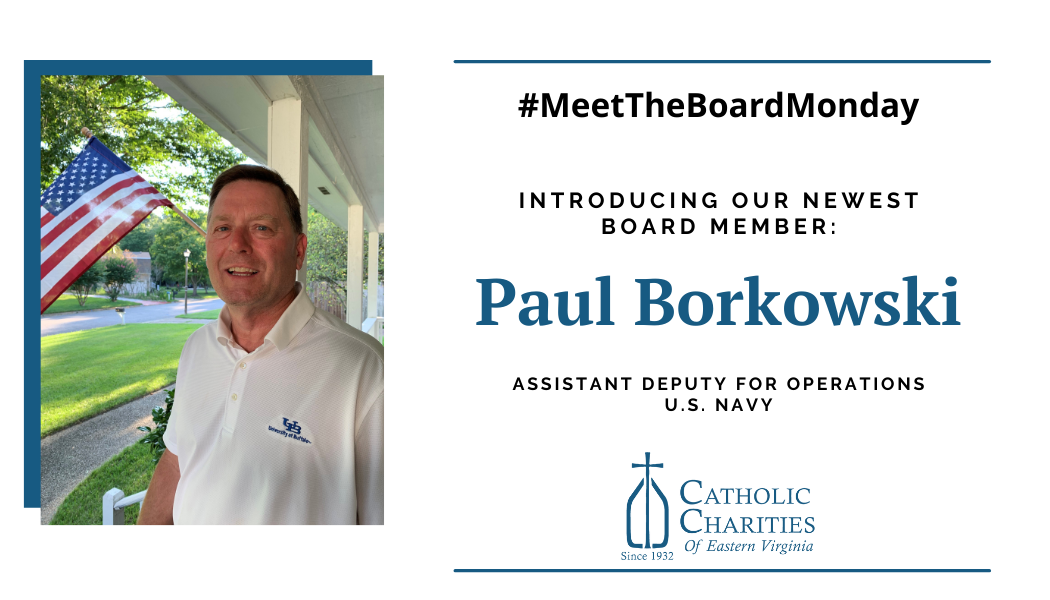 Catholic Charities of Eastern Virginia is proud to welcome Paul Borkowski to our Board of Directors. Read below to learn more about our newest board member.

Paul Borkowski grew up in Buffalo, New York and joined the Navy after college as a Surface Warfare Officer in 1987.  After 22 years of service, overseas deployments around the world and 13 stations, he retired from the Navy in 2008. Since then, Mr. Borkowski has served as a civilian employee for the Navy out of Norfolk as the Assistant Deputy for Operations. Paul is married with three children, two of which are graduates at Virginia Tech; the third is currently studying at James Madison University. The Borkowski family are members of the Chapel of the Good Shepard at NAS Oceana and Paul has been a member of the St. John the Apostle Knights of Columbus Council 13467 for four years.

Mr. Borkowski was first introduced to Catholic Charities by Board Chair, Tim Murphy. Tim and Paul were stationed together in Italy and their families became close. When the Murphys moved back to Norfolk, the families reconnected and Tim invited Paul to CCEVA’s Annual Gathering and Breakfast. After participating in several CCEVA Breakfasts and Golf Tournaments, Tim offered to sponsor Paul as a board member and he accepted. Mr. Borkowski was voted onto the Board this April.

“As your kids get older, you have more time to give outside of your family. Becoming a board member seemed like the right thing and I was excited to be unanimously voted in.”

“At first I wasn’t sure what Catholic Charities did in particular, but I had heard of Catholic Charities and knew they took collections at Christmas. It wasn’t until Chris (CEO), put it into personal perspective of what they do and who they help and the quiet manor in which they served their clients, that I realized the self-sacrificial nature of the organization. Chris explained that even the staff make sacrifices and use  outdated computers so that more money can go towards the programs and the people they serve.”

What CCEVA Program Is the Most Special to You?

“The Aspire program because it teaches people about financial education to get you self-sufficient and help you excel; also Senior Care. After sitting in on previous consultations on senior living and health insurance, it is amazing to me how much our seniors need care and help to get care delivered to them. In the winter of their lives, they deserved to be taken care of.”

“I’m excited to get started. After sitting through just one board meeting and seeing the level of excitement each board member has, I look forward to seeing where I fit in and can best deliver value to the organization.”

“There will be more awareness of the goodness that CCEVA brings to the community – that there are services available to individuals anywhere, anytime. There is an opportunity to highlight the goodness – to bring more people to services, find more board members and more support for the organization.”

The One Thing You Want Everyone to Know About CCEVA

“The breakfast tagline – ‘we don’t do this because they are Catholic, we do this because we are.’ That line made me go back and look up the term Catholic. It means that everybody is welcome. It doesn’t matter where you are in terms of religion or your need, if Catholics can help, we will, because that’s what we do.”